To save costs and become more agile, businesses small and large are increasingly virtualizing their data center infrastructures and applications. Many enterprises have started deploying IT applications in virtualized data centers that are built and managed by third-party service providers. These external data centers, known as provider-hosted clouds, allow enterprises to gain infrastructure and resources on demand and become even more operationally efficient.

However, the shared-infrastructure, shared-resource cloud environment poses networking and security problems for enterprises:

●      An enterprise does not own its cloud connectivity, so it cannot extend its network configuration into the cloud.

●      An enterprise does not enjoy the same levels of privacy and security for its cloud deployment as it does for its premises.

●      An enterprise cannot directly connect its distributed sites to its cloud applications, having to, instead, backhaul all network traffic through its data center because it lacks a network-aware endpoint in the cloud.

●      The primary concern is the limitations of scaling the current network switching architecture.

●      The cloud provider also lacks all the components of an end-to-end managed connectivity service offering to its customers, including Quality of Service (QoS), application visibility, and Service-Level Agreements (SLAs).

In addition to bringing enterprise-class networking services and security to public cloud environments, the Cisco Catalyst 8000V can be used as a building block for scalable network service offerings. The included Network-Functions-Virtualization (NFV) components allow the Catalyst 8000V to fill roles traditionally reserved for hardware-based devices. Virtualizing these complex functions allows service providers to consolidate numerous instances onto a single server, and to easily scale as new customers come on board or networks are expanded.

The Cisco Catalyst 8000V is a software router that an enterprise or a cloud provider can deploy as a virtual machine in a provider-hosted cloud or in its own virtual environment. It can run on Cisco Unified Computing System™ (Cisco UCS®) servers as well as on servers from leading vendors that support VMware ESXi, Red Hat KVM virtualization, or on the Amazon EC2 cloud, Microsoft Azure cloud, or Google Cloud Platform. It contains Cisco IOS XE Software networking and security features.

A typical cloud provides IT infrastructure and resources to multiple customers or tenants. The Cisco Catalyst 8000V serves primarily as a router per tenant (Figure 1). That is, each tenant gets its own routing instance and hence, its own VPN connections, firewall policies, QoS rules, access control, and so on. The router can, however, also be deployed as a multitenant router, using Virtual Route Forwarding (VRF) to maintain separate routing tables and feature configurations for each tenant it services. 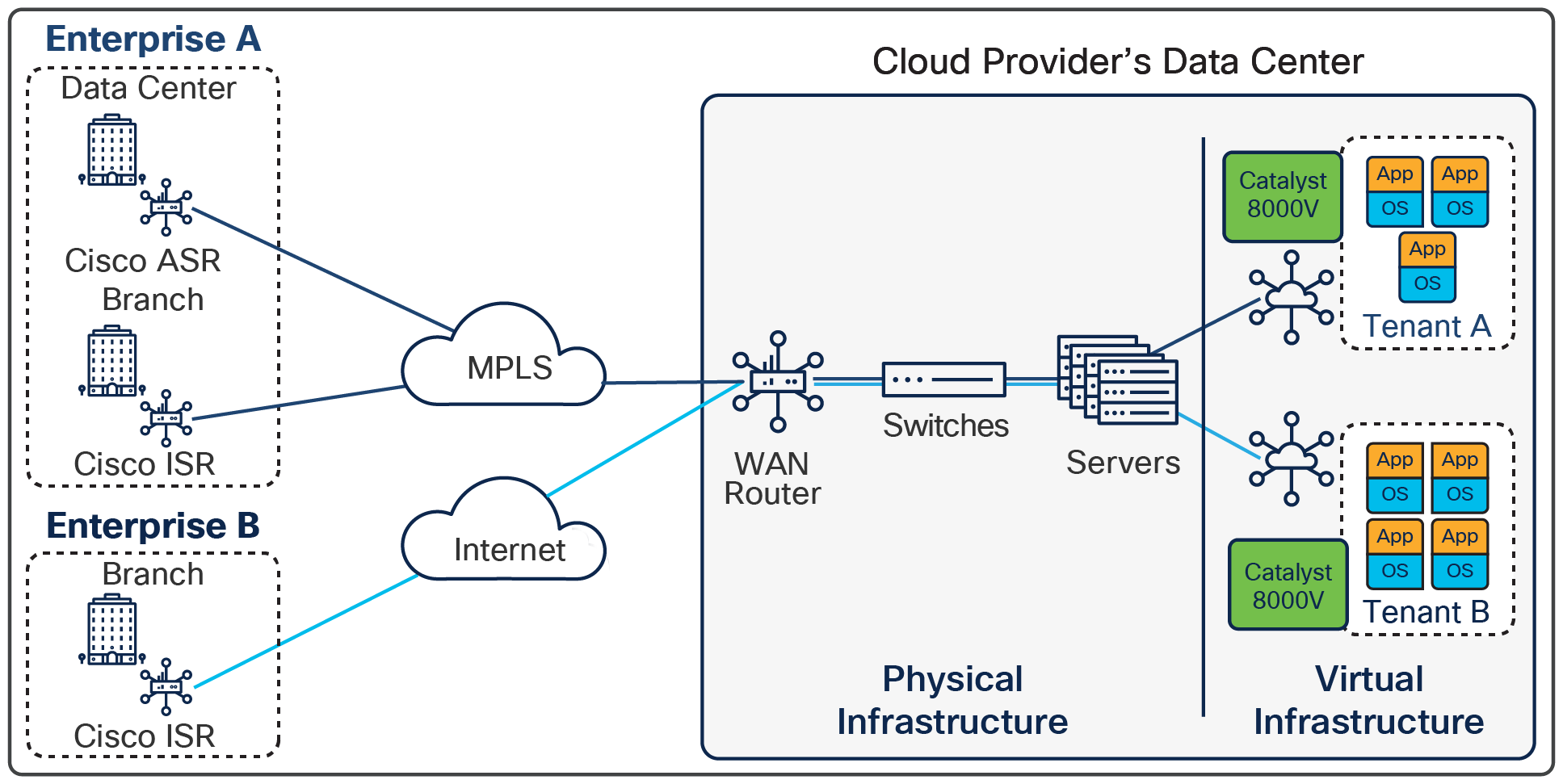 Key use cases for the Cisco Catalyst 8000V

● Layer 2 (virtual-machine migration) or Layer 3 extension (IP mobility) from premises to cloud: The Cisco Catalyst 8000V offers features such as NAT and Locator/ID Separation Protocol (LISP) that allow an enterprise to maintain addressing consistency across premises and cloud as it moves applications back and forth or bursts compute capacity into the cloud. The Overlay Transport Virtualization (OTV) and Virtual Private LAN Services (VPLS) features of the Catalyst 8000V allow an enterprise to extend VLAN segments from its data center into the cloud for server backup, disaster recovery, and compute scale.

Cisco Catalyst 8000V as a Layer 2 or Layer 3 extension

● Virtual Extensible LAN (VXLAN) gateway: The Catalyst 8000V can participate in a VXLAN network serving as a VXLAN Tunnel Endpoint (VTEP), and therefore as a termination point for VXLAN Network Identifiers (VNIs). For large data center and service provider networks, this feature allows for greatly increased scalability in the number of simultaneously operating isolated tenant networks. After a VNI is terminated by the Catalyst 8000V, its traffic can be Layer-3 routed or Layer-2 bridged to other VXLAN or non-VXLAN networks.

● Virtual route reflector: The Catalyst 8000V can be deployed as a vRR to simplify the routing adjacencies required in larger networks. Because route reflection is a process-intensive (but not throughput-intensive) application, many instances of route reflectors may be consolidated onto a single server running multiple Catalyst 8000V routers. This approach significantly reduces the physical footprint, power, cooling, and cabling overhead of maintaining numerous physical route-reflector systems.

Cisco SD-WAN is a set of intelligent software services that allows you to connect users, devices, branch office locations, and cloud deployments reliably and securely across a diverse set of WAN transport links. Cisco SD-WAN-enabled routers like the Catalyst 8000V dynamically route traffic across the “best” link based on up-to-the-minute application and network conditions for great application experiences. You get tight control over application performance, bandwidth usage, data privacy, and availability of your WAN links.

The Catalyst 8000V is optimized for the Cisco SD-WAN. For enterprises, this means that business-critical applications run faster, with more reliability and reduced Operating Expenditure (OpEx). The SD-WAN achieves this by giving all branches, data centers, and cloud deployments the ability to monitor, control, move, and report on streams of application data, such as specific-web (HTTP) traffic, for example. The Catalyst 8000V has deep packet inspection capability and can accurately identify and control thousands of different applications, including custom in-house enterprise applications.

The entire Cisco SD-WAN implementation on the Catalyst 8000V may be implemented by managing the end device, either from the cloud or on-premises, through ascending levels of throughput-based licenses. All licenses that support Cisco SD-WAN are all enabled using subscription licenses. These subscription licenses enable all customers to seamlessly transition between on-premises and cloud management as needed. The license tiers are structured to support the growth in business needs through simple subscriptions that help simplify the journey to intent-based networking for the WAN.

The benefits are immense:

1.     Extend your SD-WAN fabric to include your cloud deployments.

2.     Business-critical applications no longer have to contend each other or with traffic that should be served on a best-effort basis.

3.     The enterprise network becomes more reliable because multiple paths can be used.

4.     Costs are greatly reduced because dual MPLS links can be replaced with a mix of MPLS and Internet.

5.     The time to bring up new remote sites is dramatically reduced because the SD-WAN supports rapidly deployed DSL and 3G/4G LTE connections as easily as MPLS.

6.     Security is assured across these connections using a zero-touch secure VPN technology used by governments and finance organizations worldwide.

Some key benefits of Cisco IOS XE Software include:

●      Operational efficiency through rapid integration into any Cisco IOS Software environment, such as a branch office, WAN, data center, or cloud.

There are no products matching the selection

This is a custom CMS block displayed if category is empty.
You can replace it with any custom content.